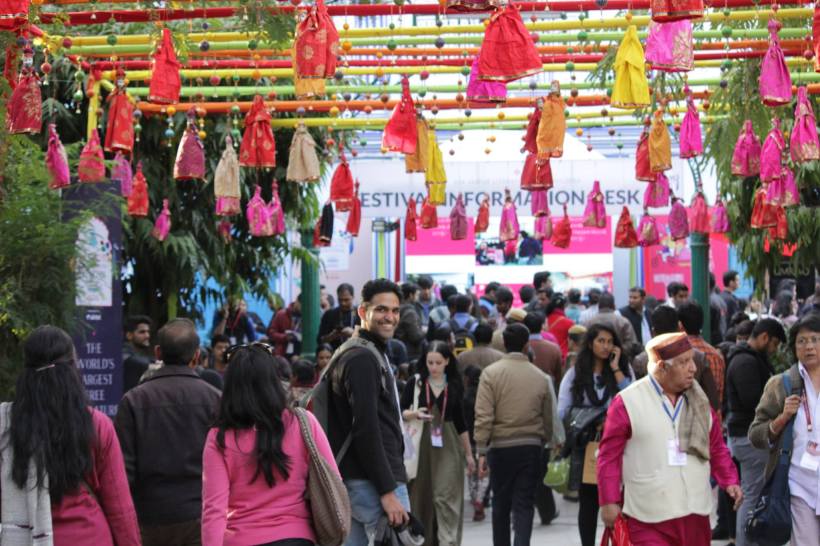 I am sitting in a small, rectangularish garden, alone and quiet – in deep thought. There is movement and plenty of noise all around me.  I can hear so many conversations and announcements coming from different directions that I can’t make any sense out of it. For some strange reason, I enjoy this kind of setting. My stillness is enhanced in chaos.

The Sun on my back is soothing. There are plastic caricatures and quotes of great authors all around. Anna Kareineina’s caricature is dressed in a red gown. Someday I wish to have my own quotes turned into caricatures.  I have beautiful, breath taking women of my own imagination. 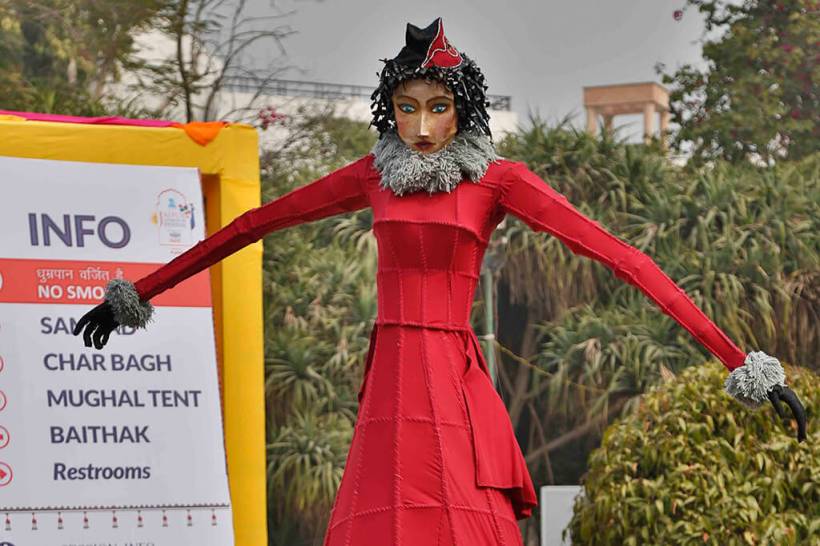 The caricature of Anna Kareineina at the Jaipur literature festival. Credit: JLF

I am not here to learn about literature, politics or one of the vast number of issues being discussed at the five stages across the rustic venue, Diggi Palace. I came with a set agenda. To find an agent/publisher for my debut novel.

I am young struggling writer at the world’s largest free literature festival in Jaipur, India.

It is not that I haven’t tried the more conventional approach of reaching out to the gatekeepers of the publishing business. I have contributed to the slush pile of more than 70 literary agents in India and abroad, written to idols like Suketu Mehta and Ruskin Bond and exhausted 2nd, 3rd and 4th degree Linked in connections, without success.

I hoped to meet and woo three powerful publishing women at the Jaipur literature festival: Chiki Sarkar (Founder  Juggernaut Publishing), Meru Gokhale (CEO of Penguin Random House) and Debasri Rakshit (Commissioning Editor at Harper Collins). They held the keys to unlock my dreams of being a published writer. 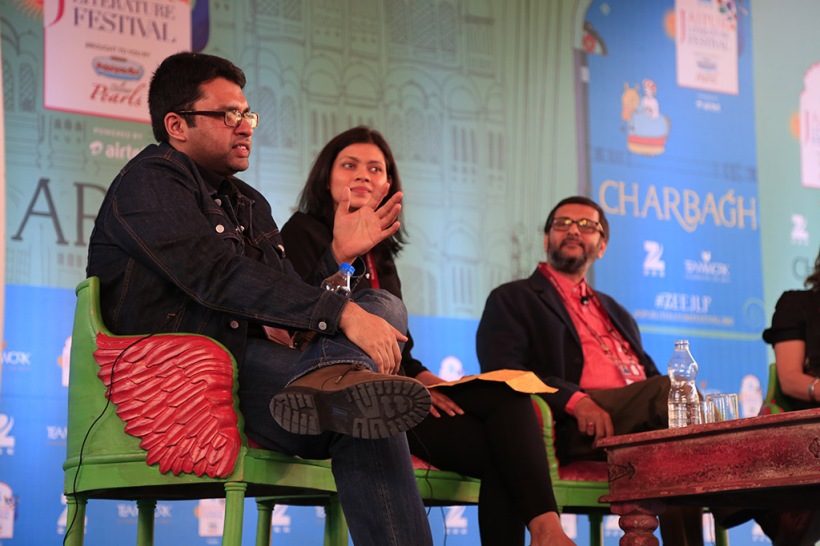 I didn’t know who she was until I sat down for the session The Creative Process: How Writers Write and asked the girl sitting next to me about Meru. Once I knew, my attention shifted completely on her.  I held on to Meru’s every word, expression and movement.

She is a brilliant moderator and like any great moderator, she talked the least, involved each one of the panelists and drew the best out of them. She was polite and gracious but firm. There was this good heartedness about her that appealed to me.

“May I have a word ma’am?” I said to her while everyone else rushed towards the authors for book signing.

“I have spent the past two years writing the story of a Turkish refugee girl in India. It is a heartfelt account of her trials in the world of Indian classical dance. I would love to share it with you.”

“Why don’t you email it on the Penguin website.”

My heart burned. I was hoping to get her personal email id. Penguin’s inbox is a black hole where debut authors’ words go missing.

“Write attention to Meru Gokhale in the subject line,” she said. “It will reach me.”

I thanked her and also managed to hand her a copy of my query letter as well the first two chapters of the story. I had them ready. She could easily throw it away in the bin or give it one glance. The destiny of a young writer hung in balance. Hopes of a young, struggling writer. 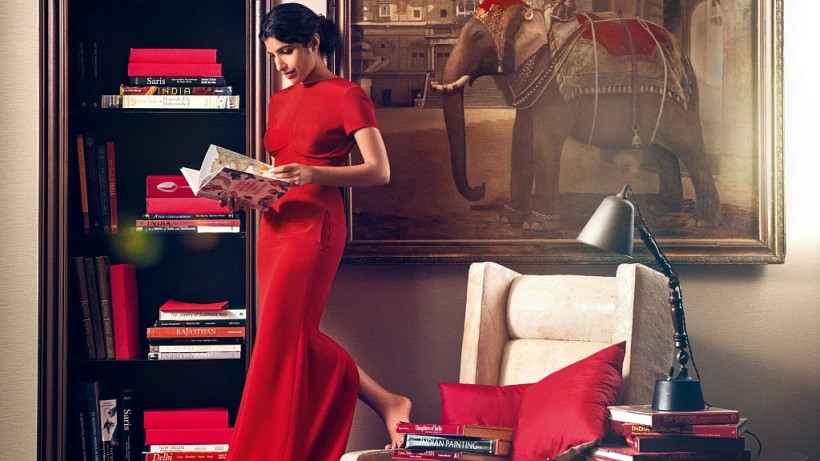 She is arguably the most recognised face of the Indian publishing industry. Former head of Penguin, she now runs her own publishing firm named Juggernaut. I had dreamt of handing over my manuscript to Chiki even before the festival had begun.

She moderated the perfect session titled, The Global Novel, full of literary heavyweights including Margaret Atwood. It was the perfect setting for me since my story spans countries, cultures and art forms. I became hopeful.

She moderated with ease and humility. Deferred to Margaret without sounding overawed. She set the tonality of the session without taking over the discussion. It was one of the most intellectually stimulating talks of JLF. Of course I approached her when she stepped off the stage.

She saw right through me.

“I am not taking queries. Send it across on Juggernaut mail.”

“I have. The editor liked the story. She asked me to add more depth to the characters. I have worked on it. Can I send it again?”

“You should. We will look at it,” she said in a reassuring manner that was least bit reassuring. Chikki broke my heart. Dreams of a young, struggling writer. 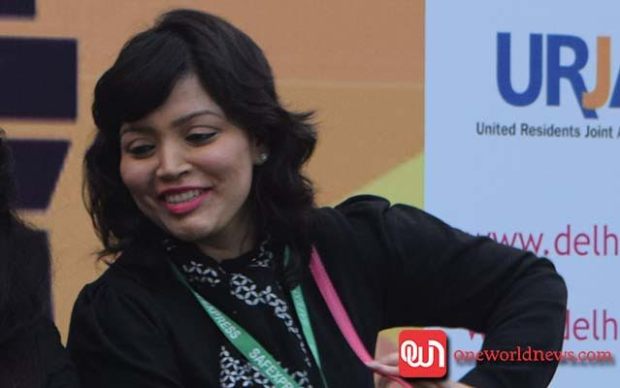 I was going home dejected when I saw Debasri walk in. It was the perfect opportunity to strike a conversation. Immediately, I took a U turn and entered alongside her. When she needed space to move ahead in the queue, I was a thorough gentleman. Gave her space and a ready smile.

“You are the writer from Delhi literature festival who wants an international publisher?”

She was most patient. Heard me out and looked me in the eye. There was a genuine curiosity, almost care in her expression. You don’t usually expect publishers and agents to have a heart. She promised to connect me to her colleague who looks at fiction. Life of a young, struggling writer

Five days passed by in a flash. Invigorating sessions, catching up with friends, warm cups of tea and some leads.  Who would I choose? That’s tough to answer. They are all powerful publishing women and I am a young struggling writers. I would pick any one of them.